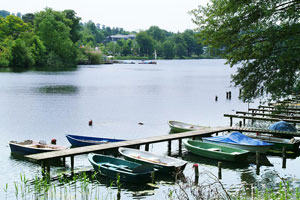 In 1996 Malente had got the title of the remedial-climatic health resort and now it has the addition to its name in the form of Bath (Bad). Bad Malente is sometimes associated with the same name of Malente which goes back to regular training camps of the German football national team in the city.

The city itself as well as the surroundings offers some unusual tourist attractions. The high-level garden and the forest kindergarten where the children can explore the nature during half a day belong to it. Several rehabilitation medical centers offer treatments to the different indications. Annual cultural events in the centre are held for young and old guests.

The surroundings are especially suit for active vacation, of course. Water sportsmen come here just for that. Whether it be sailing, diving, fishing or ship journeys Bad Malente has the best offers for every possibility. Golf course, developed track net for jogging, walking and especially for nordic walking complete the offer. The biggest Nordic walking park in Northern Germany had been originated in 2006 in collaboration with the neighboring towns of Plön and Eutin.

The sights of Bad Malente and Holstein.