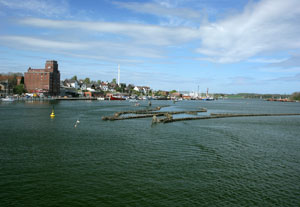 The city of Kappeln has only 10,000 inhabitants and one of the most beautiful sceneries on the western shore of the Baltic Sea. The balance bridge to Schlei, the museum of Schlei fully devoted to the marine heir of the city and the whole region, the harbor museum was brought to life in 1982 and has 20 old ships … all these and much more determine the maritime atmosphere of the provincial town. This is the only place where the herring fence is still preserved. It helps the fishermen to catch herring. When it tries to escape it gets lost in the fence and can’t find the way out. So fishermen only have to get it out of the sea. Every year Kappeln becomes a hometown of herrings’ days.

Since the end of 1980’s the city of Kappeln is a place of shooting the series of “Der Landarzt” by ZDF channel.

In the beginning of 2007 the former federal navy’s property has been closed in the district of Olpenitz. The “Port Olpenitz”, one of the greatest holiday park projects on the whole Baltic shore will be opened after finding the private investor.

Even now some captains have reserved a place in the city yacht harbor as well as in the nearby places of Arnis and Kopperby. Sport and healing baths enrich the tourist offers.

The sights of Kappeln and Schleswig.